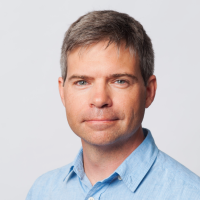 Jon Wiley is a product and design leader with 20+ years of experience designing and building world-changing products and leading high-impact teams. Most recently, Jon was Senior Director for Ambient Computing at Google where he was responsible for driving the vision of ambient and ubiquitous computing throughout the company.

Jon joined Google in 2006. He was the first designer for Google Autocomplete (predictive search queries), and led the Search UX team through three redesigns, the transition from desktop to mobile, and the addition of new features such as the Knowledge Graph and the Assistant. Jon is a co-founder of Material Design, Google's design language for all applications and the Android platform.

Jon is a native of Austin, where he received a degree in theatre from the University of Texas. While performing improv and sketch comedy on Austin's famous Sixth Street, instead of waiting tables he honed his web design skills. Eventually that paid the bills better than comedy.

Jon occasionally returns to his acting roots. You may remember him as The Autocompleter.